Home > Politics > Shocker: Politician Who Takes Responsibility for her Actions.

Shocker: Politician Who Takes Responsibility for her Actions.

A politician who takes responsibility for their actions, is damned refreshing.  Congresswoman Katie Hill shows the way.

When first elected, I loved Katie Hill as one of our newest hard charging women in politics.She was the Democratic Member of the House representing Santa Clarita, CA.  She is bold, smart, and funny. I wanted to watch her do good things. I felt she could really make a difference. Then, Katie Hill made a mistake.

Katie Hill had an affair with a campaign staffer. That’s inappropriate, although not illegal or against any rules. It appears to have been consensual but based on the balance of power nevertheless exceptionally bad judgement. Katie has admitted this happened. Katie decided to resign because it happened.

Katie Hill  is the first woman politician to take responsibility and resign for sexual impropriety in the post #MeToo era. Twelve men have resigned.

Now….was Katie targeted and outed by a right wing conservative blog because she was a shining star? Yes.

BUT, two wrongs don’t make a right. What’s good for the goose is good for the gander, and we wouldn’t like to see it from a male politician. Her being a woman, doesn’t give her a pass.

This isn’t the first time we’ve seen this kind of loss in the democratic party. Losing Al Franken from the senate was sad to me, but he had to go. If Democrats are going to represent what is good in the world, then those who get caught sleeping with staffers, or pinching butts, or offering sex for opportunity don’t get to represent us. Bill Clinton was impeached for improprieties in the same vein remember?

Which takes us to the current Republican party. Our president has been credibly accused of rape/assault/and harassment 67 times. SIXTY SEVEN TIMES! And we or he don’t do a damn thing about it.

We believe the women. We know our president is a straight up misogynist. (and a racist and a bigot and an idiot) Will he resign because he’s broken the rules? No. Will his party even call him out for it? No.

That’s why it is so refreshing that Katie accepts responsibility. She doesn’t lie and disparage. The Congresswoman understands the concept of shame. She made a bad judgement call, and she accepts that comes with consequences.

In her resignation she said,

” I am sorry, and I am learning I am not a perfect person and never pretended to be,”

I will miss Katie Hill, but she had to go. But at least she can do it with her head held high that she did the right thing, after she did the wrong one.

Her resignation letter, where oddly a politician takes responsibility for their actions, is below.

Click here to read about Monica Lewinsky’s lessons on fame and shame.

It is with a broken heart that today I announce my resignation from Congress. This is the hardest thing I have ever had to do, but I believe it is the best thing for my constituents, my community, and our country.

See my official statement below. 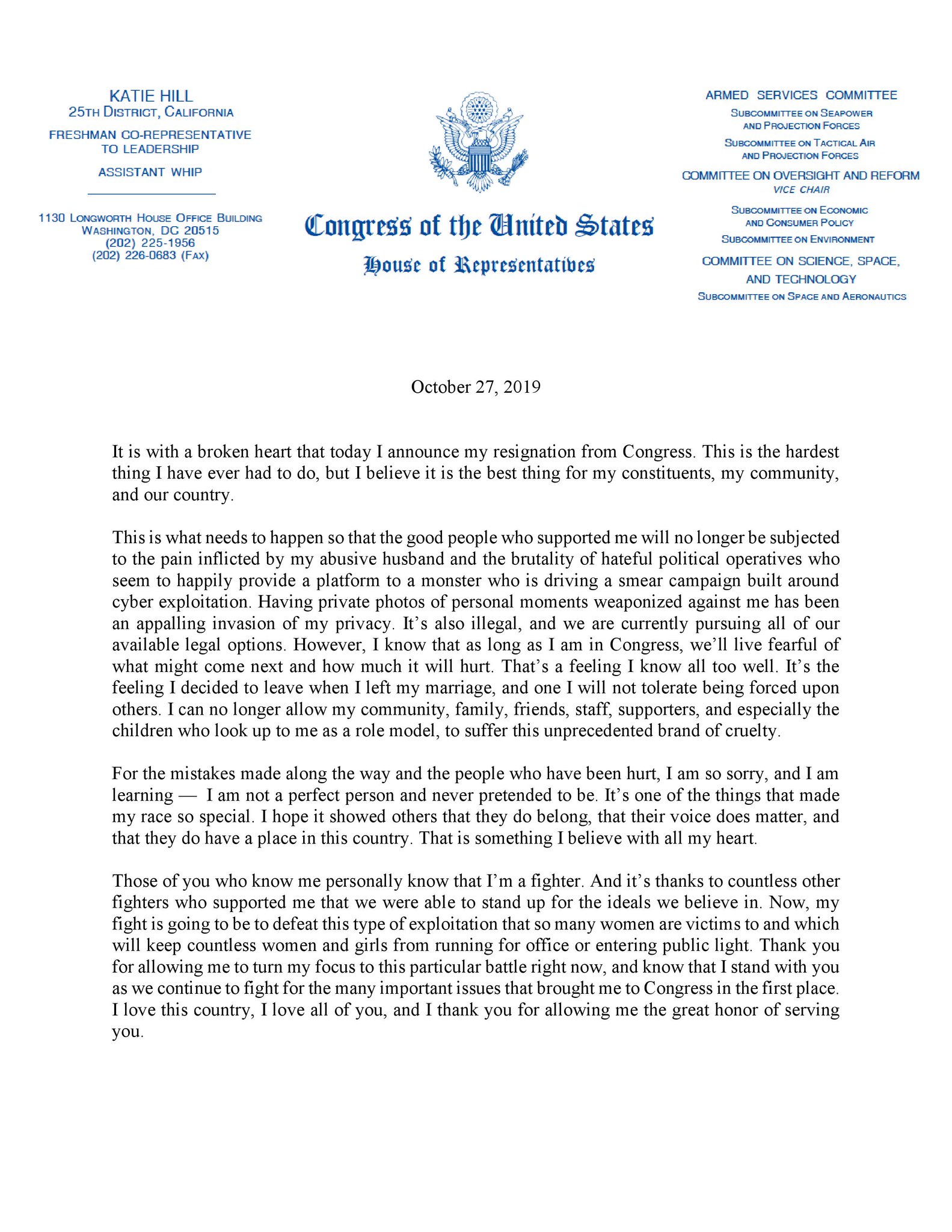 We Have a Judge Problem

A City Designed for Women by Women

Why is The Wage Gap Improving so Slowly? Ask your Republican Senator